To some visitors, the exterior, and maybe also the interior of the Bayreuth New Palace may seem rather modest. It is certainly not comparable with palaces like the Würzburg Residenz far as size and splendour are concerned. Nevertheless, the Bayreuth Palace is one of the main works of 18th-century German architecture. It is neither grandiose nor overwhelming but finely and delicately designed and intimate, in other words it is a perfect example of the "Bayreuth rococo" style. 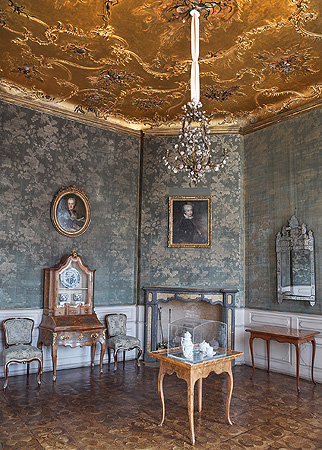 Drawing Room with a Gold Ceiling

The margravial couple Friedrich and Wilhelmine had long wanted a new Residence. The old town palace, a fine baroque building dating from the 17th century, was no longer adequate for the grand style in which they kept court, nor was it equipped with the new residential comforts of the 18th century. After the fire of 26 January 1753 that reduced most of the Old Palace to ashes, the new building became a necessity.

"I had the pleasure of designing the plan for my palace myself". Even if they should perhaps not be taken too literally, these words of Wilhelmine in a letter to her brother Friedrich nevertheless show that the margravine participated substantially in the planning and building of the New Palace, as it was to be called.

The actual architectural construction was the work of the Bayreuth court architect Joseph Saint-Pierre. For its location he chose a plot of land by the margravial pleasure gardens. The open row of buildings erected there just under ten years previously were incorporated in Saint-Pierre's New Palace to form the present elongated building. 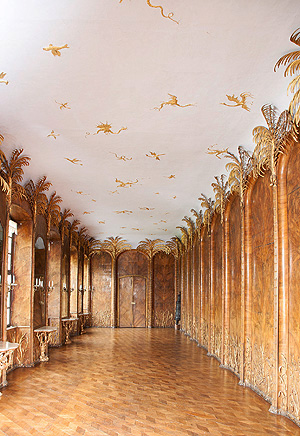 Here too, as in the Old Hermitage Palace, Wilhelmine had a major influence on the design of the rooms.

The Cabinet of Fragmented Mirrors with a representation in stucco-work by Jean-Baptiste Pedrozzi of the margravine as a female Chinese sage, the Drawing Room with a Gold Ceiling, Wilhelmine's Japanese Room with its design of trellises covered with exotic flowers and the Old Music Room with pastel portraits of singers, actors and dancers are the most outstanding examples of the interiors created under her direction.

The New Palace reflects the life, works and philosophy of Margravine Wilhelmine and her husband Friedrich. It is an introduction to a fascinating rococo world, and a record of the unique way in which this style evolved at the court in Bayreuth.

In the south wing, where the margrave had his apartments, is what is probably the most important of all the interiors in the Bayreuth rococo style, the Palm Room, with its exquisite walnut panelling. 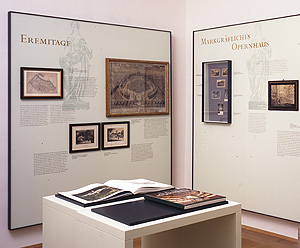 After the main palace was completed, in 1759 the small Italian Palace was begun for the margrave's second wife, Sophie Caroline von Braunschweig-Wolfenbüttel. Originally free standing, it was later connected up with the south wing of the New Palace.

On the ground floor is the Rummel Collection of Bayreuth faience acquired in 1977. The Museum "Margravine Wilhelmine's Bayreuth" provides a comprehensive picture of the world of the Bayreuth court in the 18th century.

Continuing on from the reopened gallery of late baroque art belonging to the Bavarian State Painting Collection is the margravial garden apartment and the Italian Palace.