Markgravine Wilhelmine, the favourite sister of Frederick the Great, is without a doubt one of the most outstanding women of the 18th century. Unlike Tsarina Elizabeth or Maria Theresia for example, Wilhelmine's successes were achieved not in politics but in the intellectual and artistic world. She represented an epoch of change, the Age of Enlightenment. 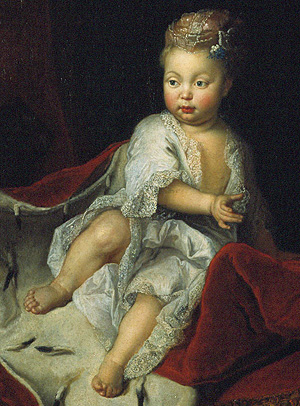 Princess Wilhelmine at the age of two,
Antoine Pesne, c. 1711

Princess Friederike Sophie Wilhelmine was born on 3 July 1709, the daughter of the soldier king Friedrich Wilhelm I of Prussia and his wife Sophie Dorothea from the House of Hanover.

She was the oldest of ten brothers and sisters; her brother Crown Prince Friedrich, who was three years younger, received the epithet "the Great" when he in turn became king (Frederick the Great).

Soon after Wilhelmine's birth, the queen determined that her brother's son, who was the same age as Wilhelmine, was to be her daughter's future husband, with the idea of forging a closer link between the dynasties. The House of Hanover was expected to take over the English throne in the near future, and Wilhelmine would thus become Queen of England.

However, this was not to be. For two decades the English court gave no clear signs that it approved of this marriage, a fact Wilhelmine's mother, who was by nature not very realistic, preferred to ignore. The marriage question led to considerable tensions between her parents, as the opinion of the king, who was often influenced by self-seeking advisers, usually differed from that of his ambitious wife. 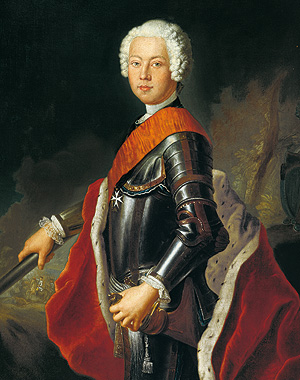 Finally, when the marriage plans came to nothing as a result of all the intrigues, they settled on the Bayreuth Crown Prince Friedrich (1711-1763). The idea behind this choice was to bind the small Franconian margraviate, which had in the past showed a tendency to drift politically towards the Austrian camp, more closely to their common origins.

The first impression the Bayreuth margraviate made on Wilhelmine when she passed the border was devastating. The description of her journey to her new home is a clear indication that this marriage was a sacrifice. When she finally arrived in Bayreuth, her disappointment was even greater.

The palace in which she was now to live had none of the proportions she was in effect used to from Berlin. However, she was fortunate in that she loved her husband. On 30 August 1732 Wilhelmine's only child, her daughter Elisabeth Friederike Sophie (1732-1789), was born. 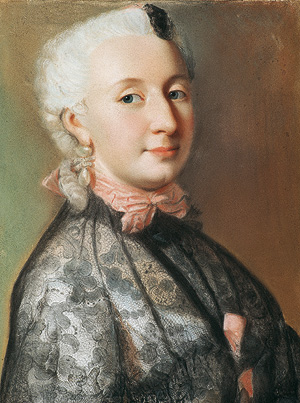 Wilhelmine had a major influence on the planning and furnishing of the Bayreuth palaces and the design of the gardens. The margravine also took an active interest in all the arts: she painted, composed, wrote works for the stage, occasionally acted as well and directed. She was an important international writer who corresponded with the great intellects of her day, including Voltaire.

There were other princes in this period who were also actors, architects and composers, but unlike them, Wilhelmine was very gifted in all these areas and viewed culture as a whole as an integral part of life.

18th-century Bayreuth with its attractive palaces and parks, designed for the enjoyment of life, is largely the work of Wilhelmine and is the expression in architecture, stucco and painting of her personality, her thinking and her artistic preferences.

It is astonishing what this dainty but energetic woman designed and created in the two decades between 1735 and 1758. Thanks to the achievements of Margravine Wilhelmine von Bayreuth, the town of Bayreuth became a milestone in the art and cultural history of Germany. Margrave Wilhelmine died at the age of 49 on 14 October 1758.