History of the Court Garden 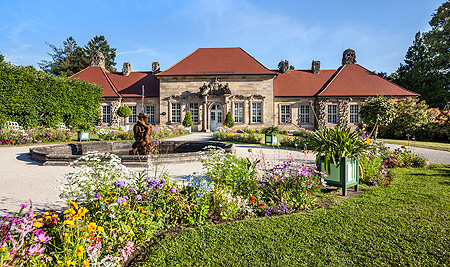 In 1715 Margrave Georg Wilhelm (reigned 1712-26) began extending the deer park laid out in 1664 to create a Hermitage, with a summer palace as the focal point. The four-winged complex by Johann David Räntz was originally surrounded on three sides by rows of linden trees which met overhead to form an enclosed corridor. In front of the Festival Hall was a parterre, followed by a cascade which ran down to the Red Main river.

Paths led across the wooded north slope to scattered huts built as retreats for the "hermits". The palace drive terminates at an artificial hill, the Parnassus and a pergola turning off at right angles to the drive leads on to the palace. The Hermitage was conceived by Margrave Georg Wilhelm as a setting where the margravial court could imitate the "simple life" of a hermit order.

The extensive woodlands of the Bayreuth Hermitage, contained within the bend of the Roter Main river, were laid out with winding paths, which were a typical feature of the subsequent English landscape garden style but highly unusual in an early 18th-century baroque garden.

The location of the seven hermitages for the court hermits indicate that these paths existed right from the beginning: the buildings were scattered irregularly across the north slope, with no axial relationship between them or between all of them and the palace. Every hermitage had a different, and apparently random orientation and the paths leading up to them also formed no pattern.

All of this had very little in common with French garden design, and instead reflects the new and revolutionary principles of the English landscape garden. What is so surprising about it is how early the main ideas of the landscape garden thus made their first appearance (almost at the same time as in their country of origin, England). 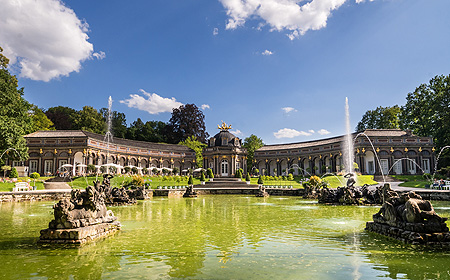 The subsequent development of the Hermitage was largely the work of Margravine Wilhelmine, who received the Hermitage as a present from her husband Margrave Friedrich in 1735. The Old Palace was enlarged and a number of new garden areas were created with water and architectural features, such as the Lower Grotto and the Orangery (today the New Palace) with the Large Pond.

Wilhelmine used traditional elements of garden design such as boskets, pergolas and fountains for the enlarged park. With the free arrangement of the individual garden areas, the absence of a dominant, central axis and the independence of the various sections from one another she departed noticeably from baroque garden traditions. This, together with the artificial ruins, such as the Ruin Theatre and the Margrave's Hermitage, makes the Hermitage one of the most unusual gardens of the 18th century. 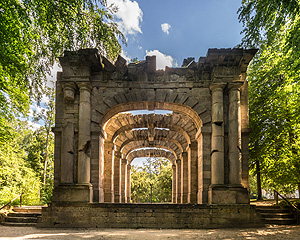 After the margravine's death in 1758 and especially after the margraviate came to an end in 1791, the elegant park was neglected. The formal garden areas, treillage, vases and other decorative features were removed. Parts of the park were sold. From 1823 to 1837 Duke Pius von Bayern spent the summer months at the Hermitage and resurrected the hermit idea for a short time, building the Hermitage Chapel near the Ruin Theatre. King Ludwig II lived at the Hermitage when he visited Richard Wagner's festivals.

After the Second World War, during which the New Palace was badly damaged, comprehensive restoration work was begun. It was possible to buy back most of the areas that had been sold, and restore features of the park that had disappeared. The Canal Garden was thus reconstructed, the Cascade that had been filled in in around 1800 was dug out and restored and the treillage at the Large Pond was rebuilt. With the summer flowerbeds designed according to 18th-century principles and the numerous tub plants, the 46 hectare garden is now largely in its original form.