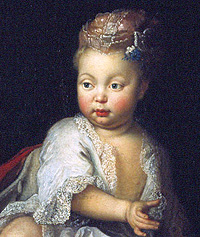 10 May: Birth of Friedrich, the future Margrave of Bayreuth and husband of Wilhelmine 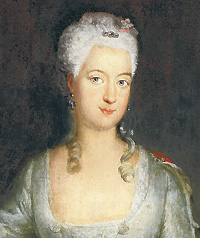 22 January: Arrival of the newly wedded couple Wilhelmine and Friedrich in Bayreuth

30 August: Birth of their daughter Elisabeth Friederike Sophie (1732-1780; the couple's only child)

7 May: After the death of his father Georg Friedrich Karl, Friedrich becomes Margrave of Bayreuth (1735-1763).

3 July: Wilhelmine's husband presents her with the Hermitage on her birthday, and she immediately starts to redesign it. 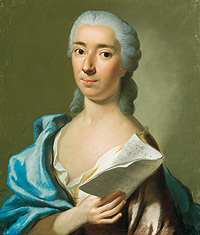 In 1737 the first Italian musicians come to Bayreuth. In the same year Wilhelmine takes over as director of the court opera.

At the margravine's instigation, a "whole caravan" of Italian stage artists arrives in Bayreuth in 1738, including the composer Paganelli and the singer Giacomo Zaghini.

10 May: Premiere of the opera "Argenore" composed by Wilhelmine for the margrave's birthday

Wilhelmine commissions her court architect Joseph Saint-Pierre to build an open-air theatre in the form of a ruin in the Hermitage Court Garden.

In the Redoutenhaus (next to the future Margravial Opera House), Wilhelmine and Voltaire appear on the stage together ("Bajazet" by Racine). 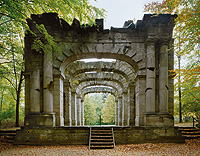 29 August: The theatre of the Hermitage, an imitation ruin, is used for a performance for the first time on the occasion of the marriage of Wilhelmine's sister Luise Ulrike.

Sanspareil, the first Chinese "Rock Garden" on the continent, is laid out under the direction of Wilhelmine; it includes a number of interesting architectural features. 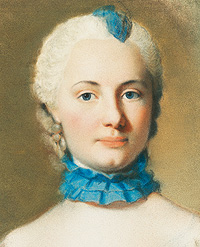 27 September: Inauguration of the Opera House on the occasion of the wedding of Princess Elisabeth Friederike Sophie von Bayreuth and Duke Carl II Eugen von Württemberg

The distinctive features of the Hermitage, the Orangery and the Temple of the Sun, are built to Wilhelmine's specifications.

The Margravial Opera House is completed.

The groups of statues in the Hermitage Court Garden are erected from 1750-1752.

The Chinese Mirror Cabinet at Hermitage Old Palace is furnished. 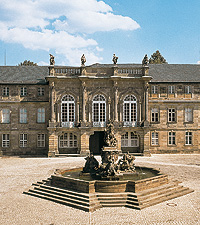 26 January: Fire in the Old Palace of Bayreuth

The New Palace is begun in the same year, incorporating existing buildings; the north wing is designed by Wilhelmine herself.

Conclusion of the work on Hermitage New Palace

The first plans are drawn up for the Court Garden of the New Palace.

Foundation of an Academy of Arts and Sciences in Bayreuth

Galleries are added to the ground floor and upper floor of the New Palace.

14 October: Margravine Wilhelmine von Bayreuth dies. From this point on there are no more performances in the opera house.

The Italian Palace south of the New Palace is built as a residence for Sophie Caroline.

26 February: Margrave Friedrich von Bayreuth dies without a male heir. This is the end of the extravagant court life in Bayreuth. Friedrich Christian, an uncle of the margrave, becomes the next ruler.

20 January: Margrave Friedrich Christian dies without a male heir. In accordance with a contract regulating succession dating from 1752, Bayreuth falls to Ansbach. Margrave Alexander is now ruler of both margraviates.

Prussia takes over the Ansbach-Bayreuth territories.

In the course of the War of the Fourth Coalition, Ansbach-Bayreuth is occupied by French troops. Napoleon keeps Bayreuth for himself, placing it under French military jurisdiction.

Bayreuth is ceded to Bavaria for a payment of 15 million francs.