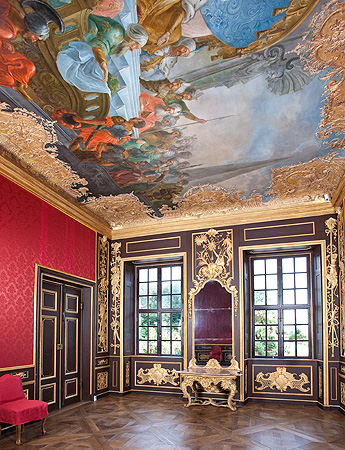 The audience room which follows is the centre of the margravial apartment. The original ceiling painting by Wilhelm Ernst Wunder shows the Persian king Artaxerxes receiving Themistocles, the successful  Athenian commander, after his own countrymen have exiled him from his home city.

The picture is typical of Wilhelmine’s selection of rarely portrayed themes from antiquity for the rooms of the Hermitage that she redesigned. Her preference is for themes revolving around exile – Wilhelmine considered herself to be in exile in provincial Bayreuth through her marriage.

back to the margrave's antechamber

further on to the Corner Cabinet