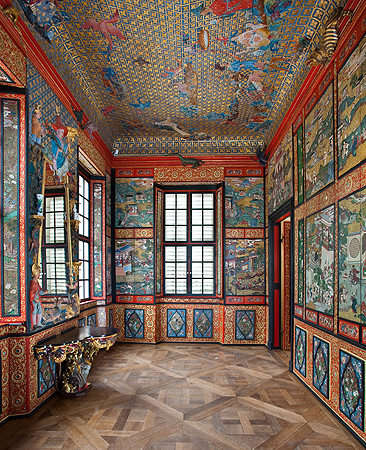 The walls of the Japanese Cabinet are clad with Asian lacquered panels, which portray all the aspects of the carefree life of a Chinese court, as Europeans envisaged it. The decoration was inspired by two original East Asian lacquered panels with shallow reliefs, which Frederick the Great had presented to his sister.

The extent to which the margravine – in accordance with the enlightened philosophy of the 18th century – identified with China as the idea of a well-ordered state governed on the basis of reason, is demonstrated by the ceiling picture in the Japanese Cabinet. The features of the empress of China enthroned beneath a baldachine are unmistakably those of Wilhelmine.

back to the margravine's audience room

further on to the Music Room