The original purpose of this building as a place of spiritual purification is reflected in the highly unusual approach to the palace. What is first seen from the original access road is a rough facade made of tuff stone, which looks more like part of a natural cliff face. 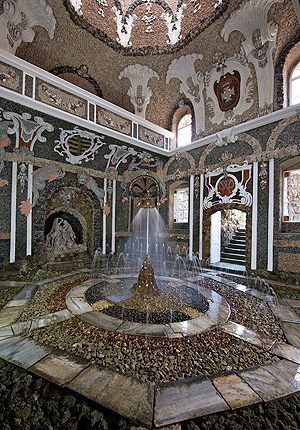 Instead of ascending a grand staircase, which would be the normal way of entering a palace, the visitor here is obliged to descend into a gloomy corridor below the stairs.

At the end of this dark corridor there is an abrupt transition into an interior of an entirely different kind: The passage opens into the high domed central room of the grotto, the walls of which are covered entirely with slag glass.

The mythical creatures made of shells – local river mussels – identify this unique interior as a grotto.

Here the prince’s guests were treated to an elaborate water display. The pipe system, which has largely been preserved in its original condition, enabled water to be sprayed with varying degrees of force from almost 200 jets hidden in the floor.

back to the kitchen (end of the tour)

further on to the inner courtyard