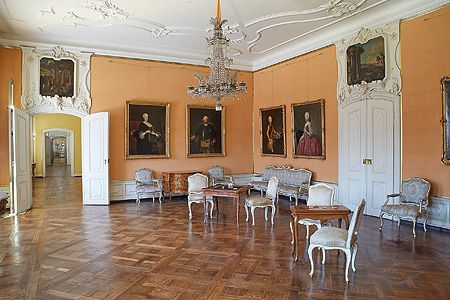 The margravine's rooms begin with the Prussian Family Room, which contains many portraits of her parents and brothers and sisters, most of them by the Berlin court artist Antoine Pesne and his pupil Georg Wenzeslaus von Knobelsdorff, better known as Frederick the Great's architect.

Originally the room was clad with precious cedar-wood panels, which had a symbolic significance. As an evergreen tree which could become several hundred years old, it was a reference to the long history of the Hohenzollern dynasty.

back to the banqueting hall

further on to the margravine's antechamber