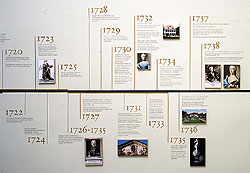 In this museum each of the five rooms is in a different colour. The pastel colours are a reference to the 18th century and to pastel painting, which was collected by Wilhelmine and her husband, both of whom were themselves artists.

The first room is something of an exception, in that it is in light brown. Running round the walls is the illustrated time line of the margravial period, which shows the history of the Hohenzollerns in Franconia and Bayreuth. 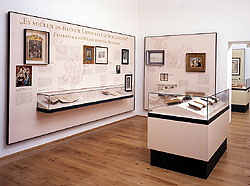 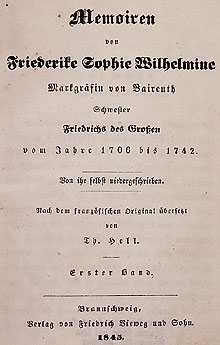 The third room is in pink, as here, in addition to Margrave Friedrich, the main subject of the documentation is Margravine Wilhelmine. Almost all the numerous exhibits in this and the following rooms, which consist of drawings, miniatures, prints, books and ceramics, are originals.

They include a dainty miniature portrait of the margrave, a pergament document signed by Friedrich and a printed flute tutor by the most famous virtuoso flute-player of the 18th century, Johann Joachim Quantz. There are also a pair of two-armed sconces in Delft faience, which Wilhelmine probably brought to Bayreuth as part of her dowry, and an original letter from the margravine to Frederick the Great dating from 1755, in which she reports on her travels in Italy. 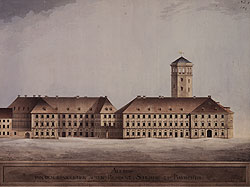 The fourth room is devoted to the New Palace of Bayreuth, once the representational building of an independent state. Here, to match the building material, the walls are painted the colour of sandstone. The precisely ordered exhibits consist of architectural drawings in the neoclassical style, which were probably produced after 1810, when the former margraviate of Bayreuth was united with the kingdom of Bavaria.

The dominant colour of the last room is green, a reference to the numerous parks in Bayreuth. In this room "Margravine Wilhelmine's Bayreuth" is presented in its entirety. The subjects covered by the exhibition panels include the Hermitage, Sanspareil, the Margravial Opera House and Fantaisie Palace.

back to the Museum of Bayreuth Faience – Rummel Collection

further on to the Garden Hall