30 June 2012 was the day that the Margravial Opera House in Bayreuth was finally accepted by a clear majority at the 36th meeting of UNESCO in St Petersburg for inclusion in the list of World Heritage Sites. As the 37th World Heritage Site in Germany, the opera house now belongs to the select group of outstanding monuments and places that include Cologne Cathedral and the pyramids of Giza, to name only two examples.

UNESCO has been awarding this highly important distinction for cultural and natural heritage for almost 40 years, with the aim of preserving for humanity buildings and places that represent outstanding cultural achievements or unique wonders of nature. Inclusion in the exclusive world heritage list is a much-coveted honour, but the application process has become increasingly complex process in recent years. In addition to extensive substantiation and experts’ reports confirming the outstanding universal value of the prospective World Heritage Site, it is necessary to prove that long-term measures to protect it are in place. If these are not maintained, the site can be taken off the list, as happened recently in Dresden. 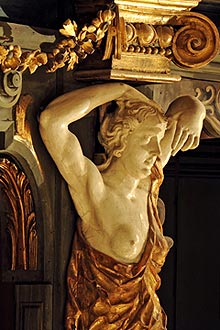 Detail from the auditorium

What singles the Margravial Opera House out as a World Heritage Site, what was the reasoning that convinced the UNESCO’s commission of experts ICOMOS (International Council of Monuments and Sites) of the outstanding quality of the Bayreuth Baroque theatre? As surprising as it may seem, the Bayreuth opera house really is the “last of its kind!” What makes the monument special is the occasion of its creation, its architectural quality and its unique state of preservation. Margravine Wilhelmine spared no effort or expense for the wedding of her only daughter Elisabeth Friederike Sophie. However, Bayreuth lacked an appropriate setting for opera performances, balls and banquets in which wedding festivities of several days’ duration could be held. The cultured margravine succeeded in engaging the most important theatre architect of the day, Giuseppe Galli Bibiena, together with his son Carlo, to design the interior. These leading European theatre specialists from Bologna created opera houses and ceremonial decoration of impressive splendour for popes, kings and emperors. Their works were mostly designed for a ceremonial occasion (birth, wedding, coronation or state visit) of only a few days’ duration. This so-called ephemeral architecture had its heyday in the Baroque era and was the inspiration for other arts. Unfortunately, this architectural form has mainly only been preserved in descriptions and drawings. 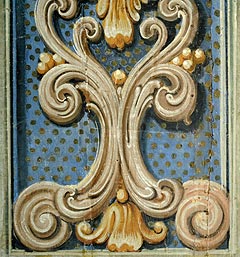 Detail of the colourful decoration

By an extraordinary piece of luck, however, the ephemeral architecture of the tiered loges in the Margravial Opera House has survived intact. While surprisingly not a single example of Galli Bibiena’s art  is now to be found in any of the many theatre venues of Italy or elsewhere in Europe, in Bayreuth we can study in great detail the Baroque master’s craftsmanship and art of producing illusory effects. Giuseppe Galli Bibiena created the fantastic auditorium with all its decorations and painting in only a few months in the year 1747. Deliberate emphasis in the painting and conscious “deceptions” give us a unique experience of architectural illusionism in the Baroque period. The trompe-l’œil features function perfectly when viewed from the auditorium and the court loge; a look at the way this interior was created reveals the sophistication of Giuseppe Galli Bibiena’s work. This Baroque auditorium can thus justifiably be considered a masterpiece of human creative genius, UNESCO’s “criterion i” for inclusion in the World Heritage list. The following is a quote from UNESCO’s reasons for its decision: »The Margravial Opera House is a masterwork of Baroque court theatre architecture by Giuseppe Galli Bibiena in terms of its tiered loge form and acoustic, decorative and iconological properties.« 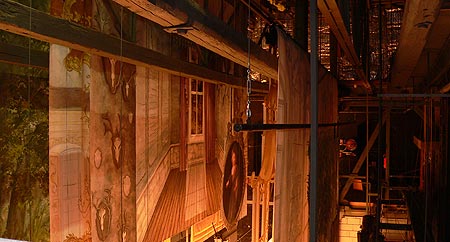 The Margravial Opera House not only has an impressive interior; its exterior has also hardly changed since Wilhelmine’s time. Designed to match the margravial Redoutenhaus and the Baroque palace on either side of it, the opera house is characterized as a special component of Wilhelmine’s Baroque town planning. The magnificent façade by the margravial architect Joseph St Pierre is one of the earliest examples of a new type of building, the theatre, which up until then had been rather inconspicuous or hidden behind palace façades. Today monumental opera house façades, which reflect the representative characteristics of these primarily 19th-century buildings, are a dominant feature of many large towns. The margravial opera house is thus an “outstanding example of a type of building”, a further UNESCO criterion of outstanding universal value.

For inclusion in the world heritage list, UNESCO requires detailed proof of the measures to protect the monument and preserve it on a long-term basis. For this reason, in addition to substantiation of the outstanding universal value, a management plan for the current and future protection of the Margravial Opera House was drawn up. In addition to concrete buffer zones in the vicinity of the property, this primarily includes legal requirements, world heritage coordination and long-term concepts for public access (see the information on the Margravial Opera House on the UNESCO homepage: http://whc.unesco.org/en/list/1379).